Would you take a ride in a pilotless sky taxi?

Tech companies are competing to develop the first viable passenger-carrying sky taxis, whether manned or pilotless, but how soon could these clever copters really be whizzing over our cities? And would you trust one?

Dubai is racing to be the first to put drone taxis in the air.

In June, its Roads and Transport Authority (RTA) signed an agreement with a German start-up Volocopter to test pilotless air taxis towards the end of this year.

The firm has received 25m euros (£22m; $30m) from investors, including German motor manufacturer Daimler, to develop the 18-rotor craft capable of transporting two passengers at a time.

The promotional video claims a top speed of 100km/h (60mph) and a maximum flight time of around 30 minutes, while nine independent battery systems ensure safety.

"You will never require" the onboard emergency parachute, Volocopter assures us. 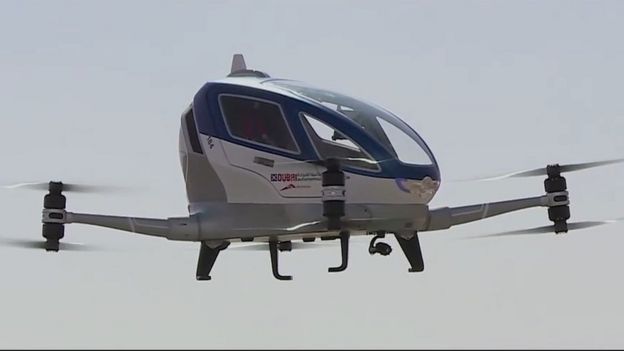 Image captionThe Ehang 184 will land automatically if any systems malfunction, its maker says 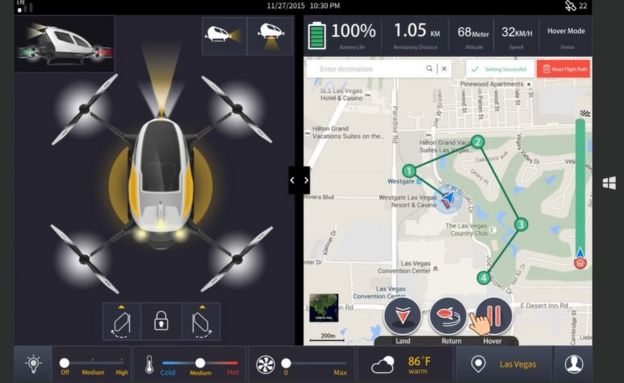 But the largest city in the United Arab Emirates faces stiff competition. It seems the whole world has gone gaga for air-cabs.

Airbus, the French aircraft maker, is also working on a prototype air taxi, Vahana, saying it will begin testing at the end of 2017 and have one ready by 2020.

They all spy opportunities in the air because traffic is becoming increasingly clogged on the ground. To take an extreme example, in Brazil's Sao Paulo, the world's 10th richest city, traffic jams average 180km (112 miles) on Fridays, and sometimes stretch to a barely credible 295km.

Yet the world's megalopolises are continuing to grow. No wonder air taxis are capturing people's imaginations. 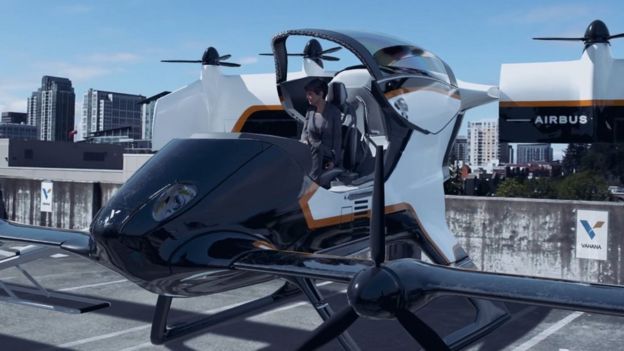 Ehang carries a single passenger, Volocopter two, while City Airbus is looking at four to six. And each of these companies is pursuing electric propulsion, seeing it as greener and quieter.

The preferred horizontal rotor technology allows for vertical take off and landing, which makes sense in densely built up urban spaces. And composite materials, such as carbon fibre, help keep weight to a minimum.

But how will they work in practice and will they be affordable?

Uber's Mr Moore says the cost, with three or four passengers sharing a pool, will be "very similar to what an UberX [car] costs today".

More seriously, given the trade-off between power and weight, how long will these things be able to stay up in the sky relying on battery power alone?

Because if you don't like your mobile going flat, you definitely won't like it when your air taxi does. 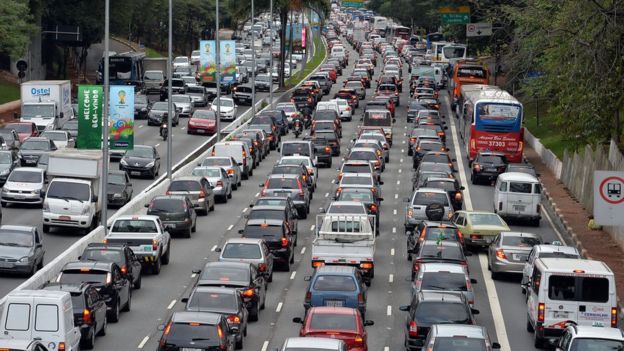 Image captionWith traffic jams like this in Sao Paulo, Brazil, it's no wonder sky taxis are an appealing concept

China's Ehang drone currently flies for 23 minutes. But US Federal Aviation Administration (FAA) regulates stipulate that aircraft require a spare 20 minutes of fuel. So this would limit the drone to a commercially unviable three-minute flight.

"It's really a problem," says Janina Frankel-Yoeli vice-president of Israel's Urban Aeronautics, a firm taking a manned, combustion-engine approach to air taxis instead.

But Mr Moore argues that improvements in batteries are "on the track we need for them to be there in 2023", when Uber plans to have its first 50 air taxis ready.

The vastly increased investment in electric cars around the world is improving recharging speeds and capacity, he says.

"We don't need long range - 60 miles covers the longest trip across a city."

So rapid recharging capability is more important than range, he argues. 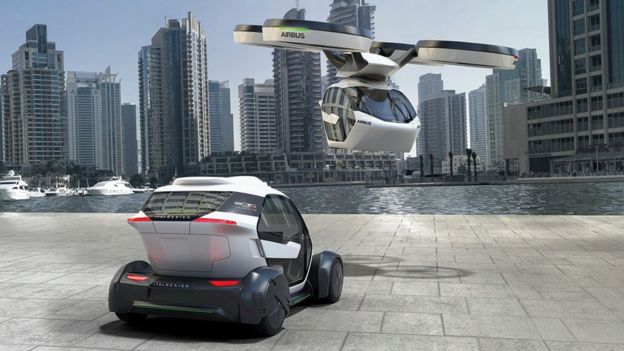 Image captionAirbus concept: Is it a car? Is it a plane? Could it be both?

Another solution may involve a two-part drone, with the batteries stored in a detachable base that can be swapped quickly between flights, says Tim Robinson, editor of the Royal Aeronautical Society's magazine, Aerospace.

"If there was a drone waiting and it had a flat battery I'm pretty sure it wouldn't let you take off, whatever your journey was," he says.

In other words, it's very unlikely that a sky taxi would run out of juice mid-flight. Once battery levels reached a critical point, the drone would make an emergency landing.

"I think we'll see multiple redundancy and back-up systems," says Mr Robinson, "like a ballistic parachute which would trigger automatically if it detected a descent rate beyond the parameters."

Another major challenge is managing the airspace and avoiding collisions.

Most major cities already have air corridors set up for helicopters that air taxis could use, Mr Moore says. But requesting to enter the corridors is currently done manually.

Is 'tap and go' a better way to give to charity?

"You'd fly to the edge of that airspace, request to enter, and maybe be told 'Nope, hold, wait'," he says.

So Nasa's NTX research centre is exploring how flight corridors can work without voice interactions. This includes improved "sense-and-avoid" technology that will allow drones to communicate with other passenger aircraft to avoid one other.

But perhaps the biggest drag on sky taxi development is regulation.

While commercial aircraft are already "virtually capable of taking off, flying and landing on their own", says Ms Frankel-Yoeli, the US FAA and European Aviation Safety Agency will not allow them to fly without a pilot.

It may take a long time for autonomous drone tech to win regulatory - not to mention public - trust. And that's ignoring the potential complaints about the noise all these buzzing copters would make in our cities.

Uber's Mr Moore believes air taxis will have autonomous capability built in from 2023, but will have human pilots for the first five-to-10 years while enough data is collected to convince regulators that sky taxis are safe.

Meanwhile Dubai seems to be racing ahead, with ruler Sheikh Mohammed bin Rashid Al Maktoum saying "by 2030, 25% of the mass transportation in the city has to be autonomous".

But Dubai is a harsh aviation climate, where "winds can go up to 40-50 knots [46-58mph], there's sand, there's fog", warns Mark Martin, an aviation consultant working there.

Perhaps Dubai is moving too quickly and should work more closely with the slower US and European regulators, he argues.

"If one crashes, who's ever going to take a drone?"

Should you let a 'robot' manage your retirement savings?